The Beta Prior and the Lambda Continuum

In an earlier post we met the $\lambda$-continuum, a generalization of Laplace’s Rule of Succession. Here is Laplace’s rule, stated in terms of flips of a coin whose bias is unknown.

To generalize we introduce an adjustable parameter, $\lambda$. Intuitively $\lambda$ captures how cautious we are in drawing conclusions from the observed frequency.

So what’s so special about $\lambda = 2$? Why did Laplace and others take a special interest in the Rule of Succession? Because it derives from the Principle of Indifference. We saw that setting $\lambda = 2$ basically amounts to assuming all possible frequencies have equal prior probability. Or that all possible biases of the coin are equally likely. The Rule of Succession thus corresponds to a uniform prior.

What about other values of $\lambda$ then? What kind of prior do they correspond to? This question has an elegant and illuminating answer, which we’ll explore here.

Let’s preview the result we’ll arrive at. Because, although the core idea isn’t very technical, deriving the full result does takes some noodling. It will be good to have some sense of where we’re going.

Here’s a picture of the priors that correspond to various choices of $\lambda$. The $x$-axis is the bias of the coin, the $y$-axis is the probability density. 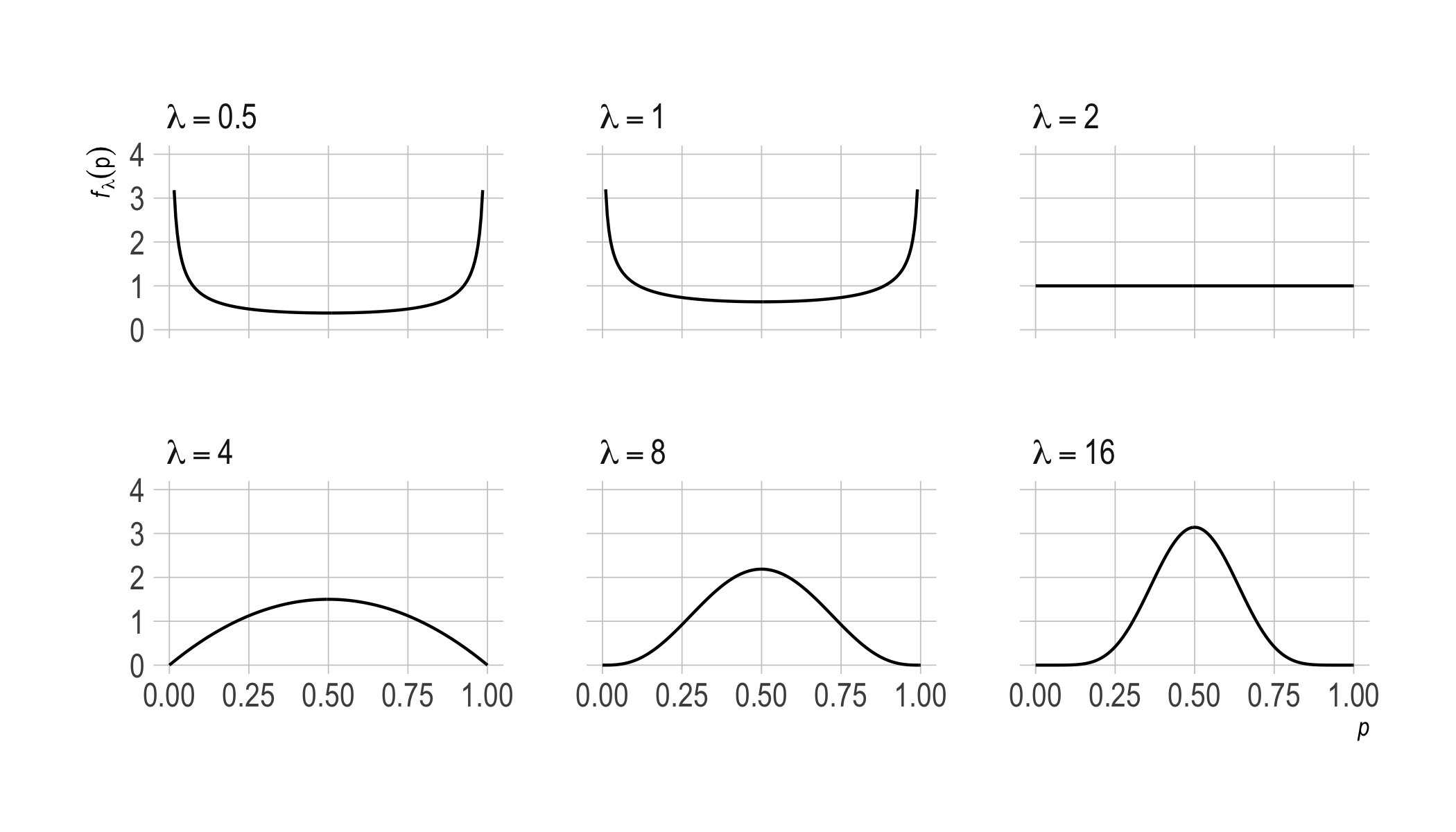 Notice how $\lambda = 2$ is a kind of inflection point. The plot goes from being concave up to concave down. When $\lambda < 2$, the prior is U-shaped. Then, as $\lambda$ grows above $2$, we approach a normal distribution centered on $1/ 2$.

So, when $\lambda < 2$, we start out pretty sure the coin is biased, though we don’t know in which direction. When $\lambda < 2$ we’re inclined to run with the observed frequency, whatever that is. If we observe a heads on the first toss, we’ll be pretty confident the next toss will land heads too. And the lower $\lambda$ is, the more confident we’ll be about that.

That’s the intuitive picture we’re working towards. Let’s see how to get there.

Notice that the Rule of Succession is the same as pretending we’ve already observed one heads and one tails, and then using the Straight Rule. A $3$rd toss landing heads would give us an observed frequency of $2/3$, precisely what the Rule of Succession gives when just $1$ toss has landed heads. If $k = n = 1$, then $$ \frac{k+1}{n+2} = \frac{2}{3}. $$ So, setting $\lambda = 2$ amounts to imagining we have $2$ observations already, and then using the observed frequency as the posterior probability.

This doesn’t quite answer our question, but it’s the key idea. We know that the uniform prior distribution gives rise to the posterior probabilities dictated by $\lambda = 2$. We want to know what prior distribution corresponds to other settings of $\lambda$. We see here that, for $\lambda = 4, 6, 8, \ldots$ the relevant prior is the same as the “pseudo-posterior” we would have if we updated the uniform prior on an additional $2$ “pseudo-observations”, or $4$, or $6$, etc.

So we just need to know what these pseudo-posteriors look like, and then extend the idea beyond even values of $\lambda$. 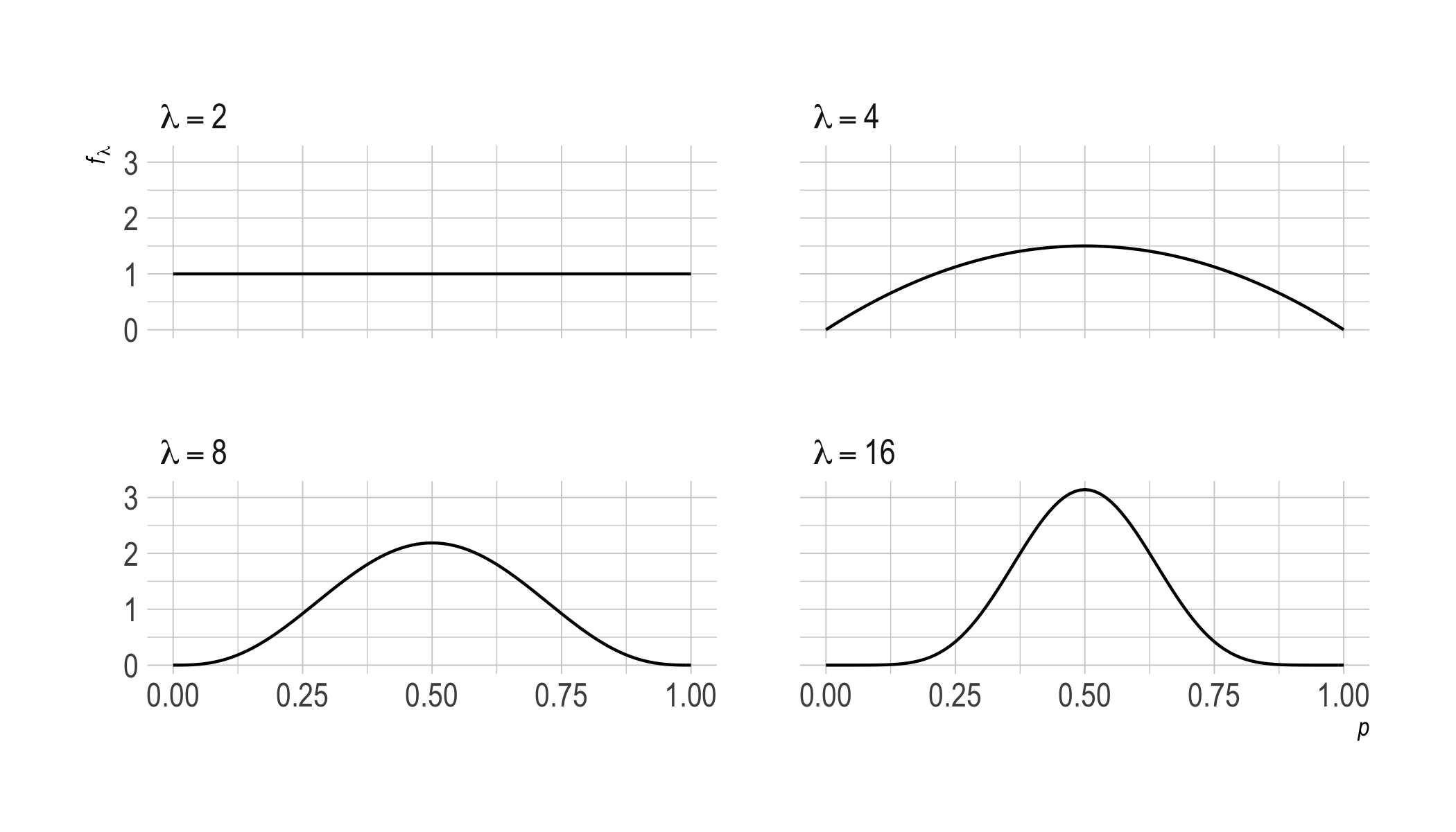 As $\lambda$ increases, we move from a uniform prior towards a normal distribution centered on $p = 1/ 2$. This makes intuitive sense: the more we accrue evenly balanced observations, the more our expectations come to resemble those for a fair coin.

As it turns out, this is a matter of generalizing the notion of factorial. The generalization we need is called the gamma function, and it looks like this: 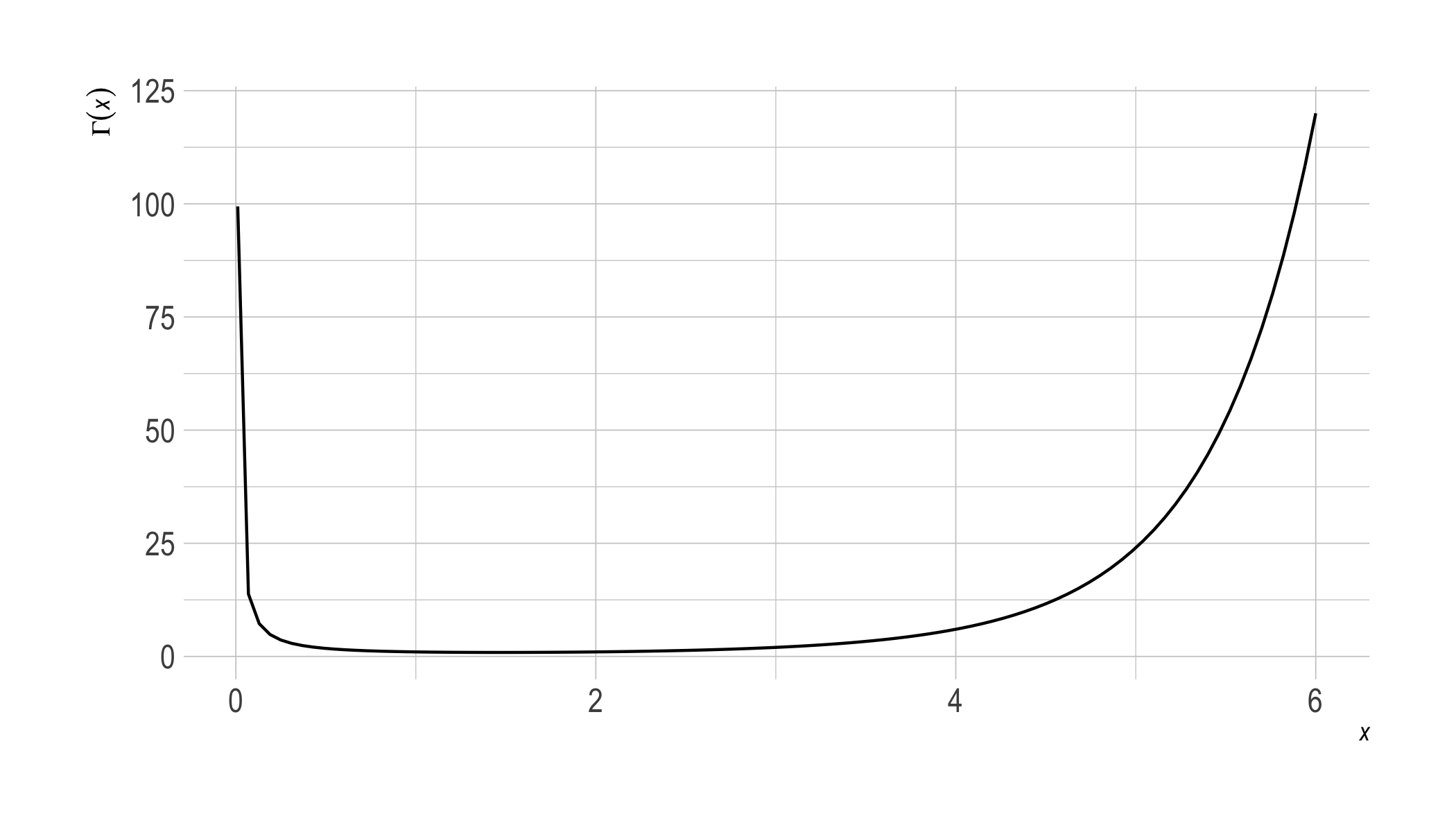 In fact we can substitute gammas for factorials in our formula for the beta function: $$ B(a,b) = \frac{\Gamma(a)\Gamma(b)}{\Gamma(a+b)}. $$ Proving this formula would require a long digression, so we’ll take it for granted here.

From Beta to Lambda

What do our priors corresponding to $\lambda < 2$ look like? Above we saw that they’re U-shaped, approaching a flat line as $\lambda$ increases. Here’s a closer look: 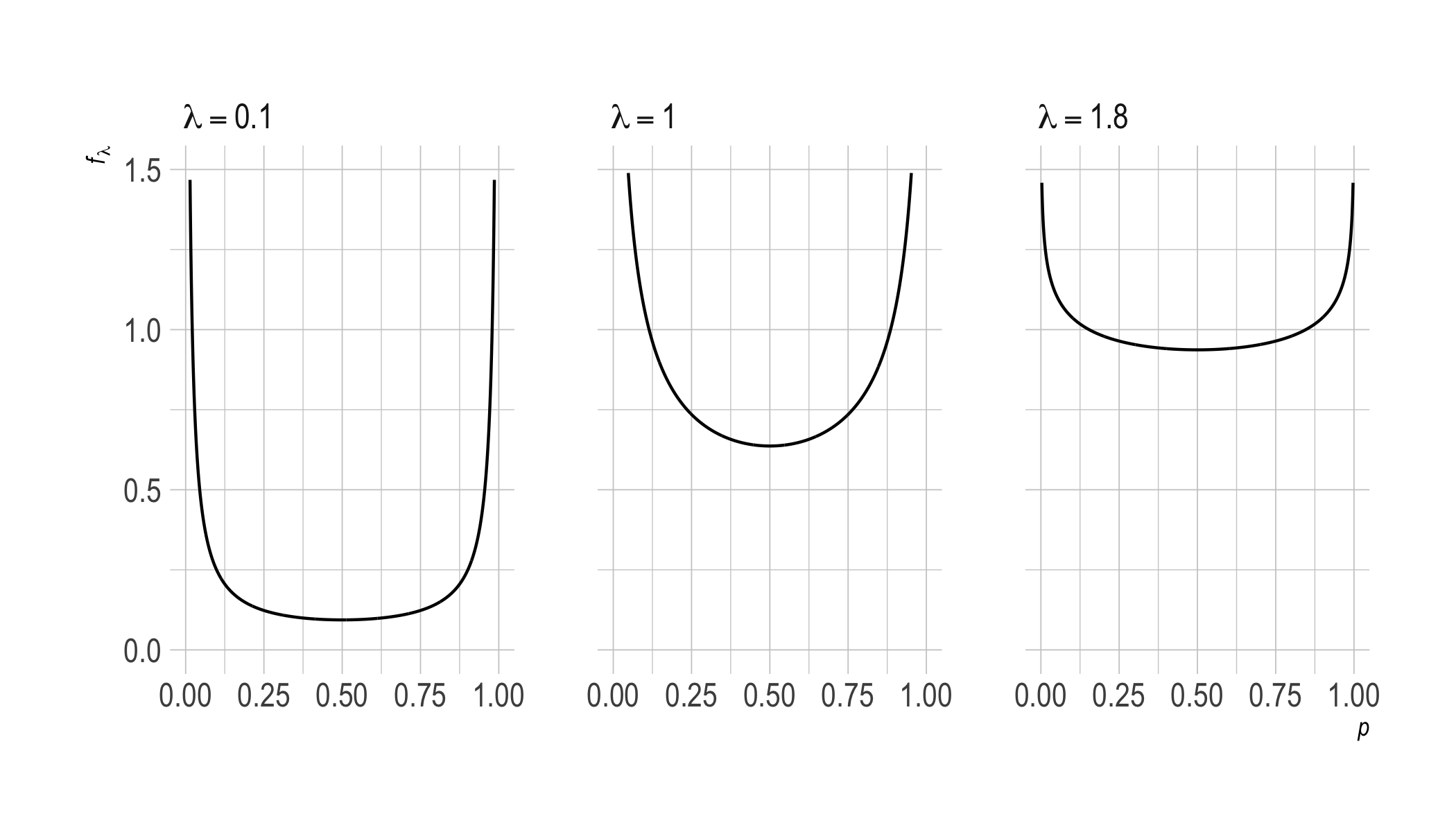 We can also look at odd values $\lambda \geq 2$ now, where the pattern is the same as we observed previously. 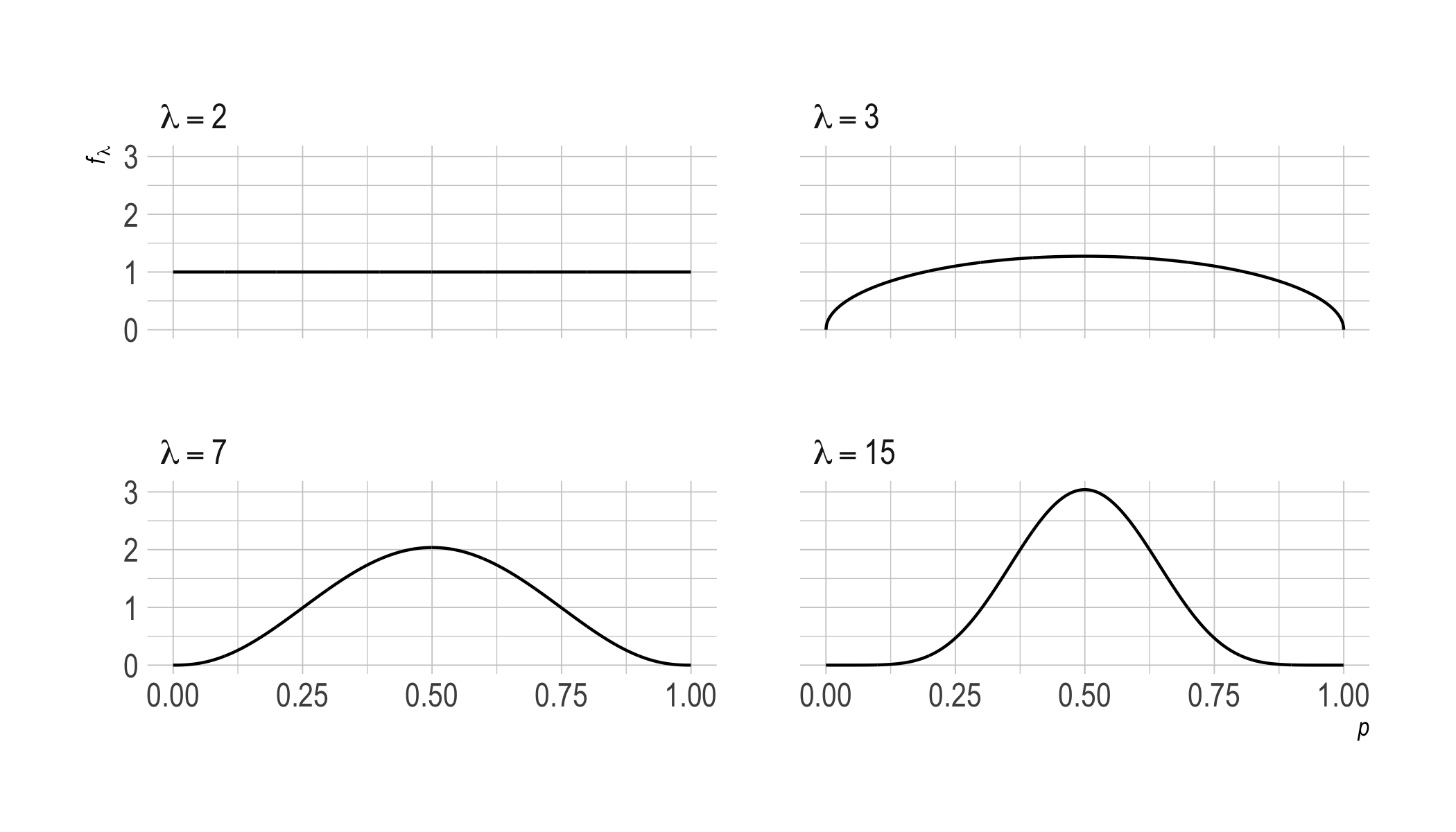 Alternatively, we can stick with the standard, Kolmogorov system and instead permit “improper” priors: prior distributions that don’t integrate to $1$, but which deliver posteriors that do.

Taking this approach, the beta density with $a = b = 0$ is called the Haldane prior. It’s sometimes regarded as “informationless,” since its posteriors just follow the observed frequencies. But other priors, like the uniform prior, also have some claim to representing perfect ignorance. The Jeffreys prior, which is obtained by setting $a = b = 1/ 2$ (so $\lambda = 1$), is another prior with a similar claim.

That multiple priors can make this claim is a reminder of one of the great tragedies of epistemology: the problem of priors.

I’m grateful to Boris Babic for reminding me of the beta-lambda connection. For more on beta densities I recommend the videos at stat110.net.