Accuracy for Dummies, Part 2: from Euclid to Brier

Last time we saw that Euclidean distance is an “unstable” way of measuring inaccuracy. Given one assignment of probabilities, you’ll expect some other assignment to be more accurate (unless the first assignment is either perfectly certain or perfectly uncertain).

Instead they use… well, there are lots of alternatives. But the closest thing to a standard one is Brier distance: the square of Euclidean distance.

But first, a fun fact.

Brier distance comes from the world of weather forecasting. Glenn W. Brier worked for the U. S. Weather Bureau, and in a 1950 paper he proposed his formula as a way of measuring how well a weather forecaster is doing at predicting the weather.

Suppose you say there’s a 70% chance of rain. If it does rain, you’re hardly wrong, but you’re not exactly right either. Brier suggested assessing a forecaster’s probabilities by taking the square of the difference from $1$ when it rains, and from $0$ when it doesn’t.

Well, actually, he proposed taking the average of those squares. But we’ll follow the recent philosophical literature and keep it simple: we’ll just use the sum of squares rather than its average.

Now on to the substance. Two facts about Brier distance make it useful as a replacement for Euclidean distance.

Euclid and Brier are Ordinally Equivalent 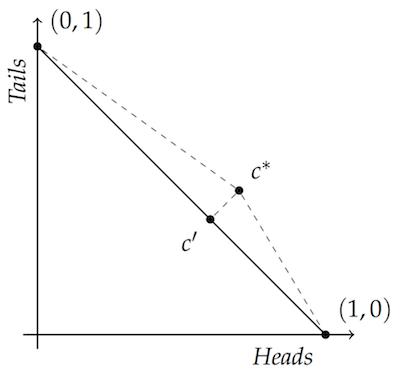 Not only is $c’$ closer to both vertices than $c^*$ in Euclidean terms, it’s also closer in terms of Brier distance.

Second, Brier distance doesn’t lead to the kind of instability that made Euclidean distance problematic. To see why, let’s rerun our expected inaccuracy calculations from last time, but using Brier distance instead of Euclid.

Suppose your credences in Heads and Tails are $p$ and $1-p$. What’s the expected inaccuracy of having some credence $q$ in Heads, and $1-q$ in Tails?

So, to complement our result about Euclidean distance from last time, we have a

When a measure of inaccuracy is stable like this, it’s called proper (or sometimes: immodest).

There are lots of other proper ways of measuring inaccuracy besides Brier. But Brier tends to be the default among philosophers writing in the accuracy framework, at least as a working example. Why?

My impression (though I’m no guru) is that it’s the default because:

How does our starting argument for the laws of total probability fare if we use other proper scoring rules, besides Brier? Really well, it turns out!

The key fact our diagram illustrates doesn’t just hold for Euclidean distance and Brier distance. Speaking very loosely: it holds on any proper way of measuring distance (but do see sections 8 and 9 of Joyce’s 2009 for the details before getting carried away with this generalization; or see Theorem 4.3.5 of Pettigrew 2016).

Proving that requires grinding through a good deal of math, though. So in these posts we’re going to stick with Brier distance, at least for a while.

We started these posts with an illustration of an influential argument for the laws of probability. But we quickly switched to assuming those very same laws in the arguments that followed.

For example, to illustrate the instability of Euclidean distance, I chose a point on the diagonal of our diagram, $(.6, .4)$. And in the theorem that generalized that example, I assumed probabilistic assignments like $(p, 1-p)$ and $(q, 1-q)$, which add up to $1$.

So didn’t we beg the question when we motivated switching from Euclid to Brier?

To some extent: yes. We are assuming that reasonable ways of measuring inaccuracy can’t be so hostile to the laws of probability that they make almost all probability assignments unstable.

Perhaps most importantly, though: the motivation I’ve given you here for moving from Euclid to Brier isn’t the official one you’ll find in an actual, bottom-up argument for probability theory, like Richard Pettigrew’s. His argument starts from a much more abstract place. He starts with axioms that any measure of inaccuracy must obey, and then narrows things down to Brier.

Ok, that’s unfair. Here’s a more even-handed (and better-informed) way of putting it, from Kenny Easwaran’s review of Pettigrew’s book:

Some philosophers have a vision of what they do as starting from unassailable premises, and giving an ironclad argument for a conclusion. However, I think we’ve all often seen cases where these arguments are weaker than they seem to the author, and with the benefit of a bit of distance, one can often recognize how the premises were in fact motivated by an attempt to justify the conclusion, which was chosen in advance. Pettigrew avoids the charade of pretending to have come up with the premises independently of recognizing that they lead to the conclusions of his arguments. Instead, he is open about having chosen target conclusions in advance […] and investigated what collection of potentially plausible principles about accuracy and epistemic decision theory will lead to those conclusions.