Prestige and Time to the Tenure-Track

How much does a PhD from a prestigious program help you on the job market in academic philosophy?

But here I want to consider whether it makes a difference to how long it takes to get a tenure-track job, if you do get one.

So which is it: does PhD prestige shorten expected time to the tenure track, or lengthen it?

Curiously, the answer so far seems to be: neither. If we use PGR ratings to measure prestige, and data from the APDA homepage to measure time-to-TT, there seems to be almost no connection. (Again, that’s assuming you do end up in a tenure-track job, which a prestigious PhD does seem to help with at least a bit.)

Because this conclusion surprised me so much (and because it’s likely to be controversial, even weaponized in the PGR wars), I’m going to make this post way more pedantic than usual. I’m going to walk through the analysis one step at a time, and even show all the code.

Hopefully, this way, careful readers will catch and correct any errors. And non-careful readers will be so turned off they’ll shut up and go away (instead of @-ing me with their volcanic takes on twitter or stirring up shit elsewhere in the blogosphere).

As usual I’m working in R, and since I’m a Hadley stan we start by importing the tidyverse package. But we’ll also import the tools package for its toTitleCase function, so that we can enforce consistent capitalization. We’ll be combining data from two different sources, the PGR and the APDA, so we’ll need the names of PhD programs capitalized the same way in order to join the two datasets properly.

Next we import the APDA data. This is the same data scraped from the APDA homepage in my last post:

Next we calculate time_to_tt as follows: (i) filter out all but TT placements, (ii) select the first placement (by year) for each graduate, and (iii) subtract the year they graduated from that:

For a glimpse of the results, here are ten randomly chosen entries:

Now we import the PGR data:

More precisely, we’ll assign each graduate a pgr_year corresponding to the latest report available the year they graduated. Unless they graduated prior to 2006 in which case we just use the 2006 ratings:

(Yes yes we could get earlier PGR data but frankly I’m too lazy to go through all that again. Most of our graduates are from 2006 or later anyway, virtually all are from 2000 or later, and PGR scores don’t change too much from iteration to iteration.)

Finally, we join our two tables together, matching by program name and year:

Phew, ok! We finally have a table of graduates from PGR-ranked programs who got TT jobs, along with the PGR-rating of their program around that time, and the time it took them to land their first TT job:

So, is there any correlation between PGR score and time to TT? Let’s plot our data, with some random jitter added for visibility, and a LOESS curve to capture trends: 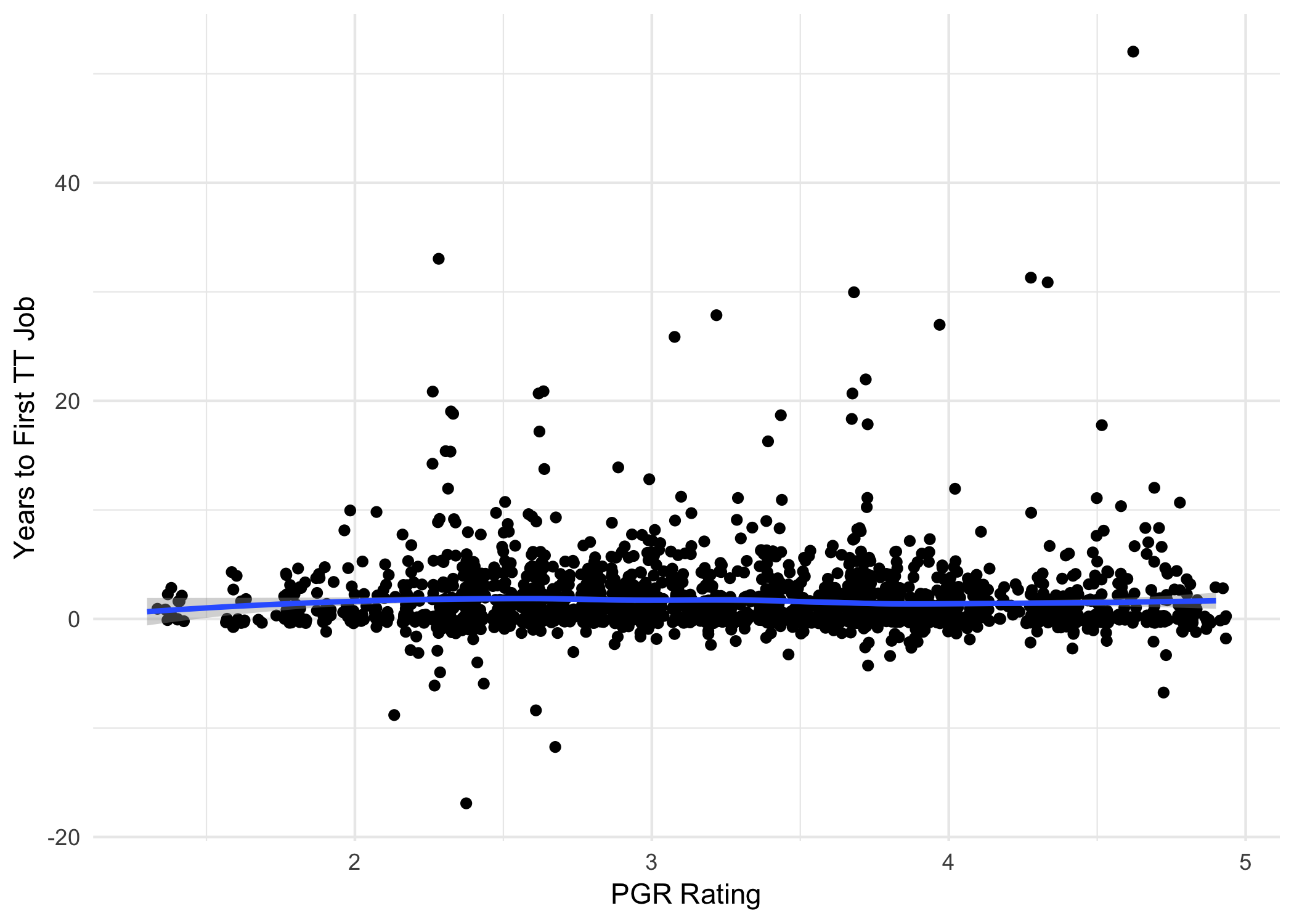 Wow, just… flat. Pretty much all the way across. And calculating the correlation, we get basically zero:

There are some pretty weird anomalies though, like that outlier way out at the top right. Who took over 50 years to get their first TT job?!? Turns out that’s David C. Makinson, author of the classic 1965 paper, “The Paradox of the Preface”!

What on earth happened here? Makinson graduated from Oxford in 1965, and recently took up a visiting professorship at LSE in 2017, a difference of 52 years. That wasn’t his first tenured gig of course. But it’s the only one listed in the APDA database.

I guess any analysis of this size is bound to include at least a few such errors. (Shut up, I’m a dad.) But let’s try to minimize them.

As a first stab, we might just cut out any extreme outliers, say all points where time_to_tt came out less than -2 or greater than 8. 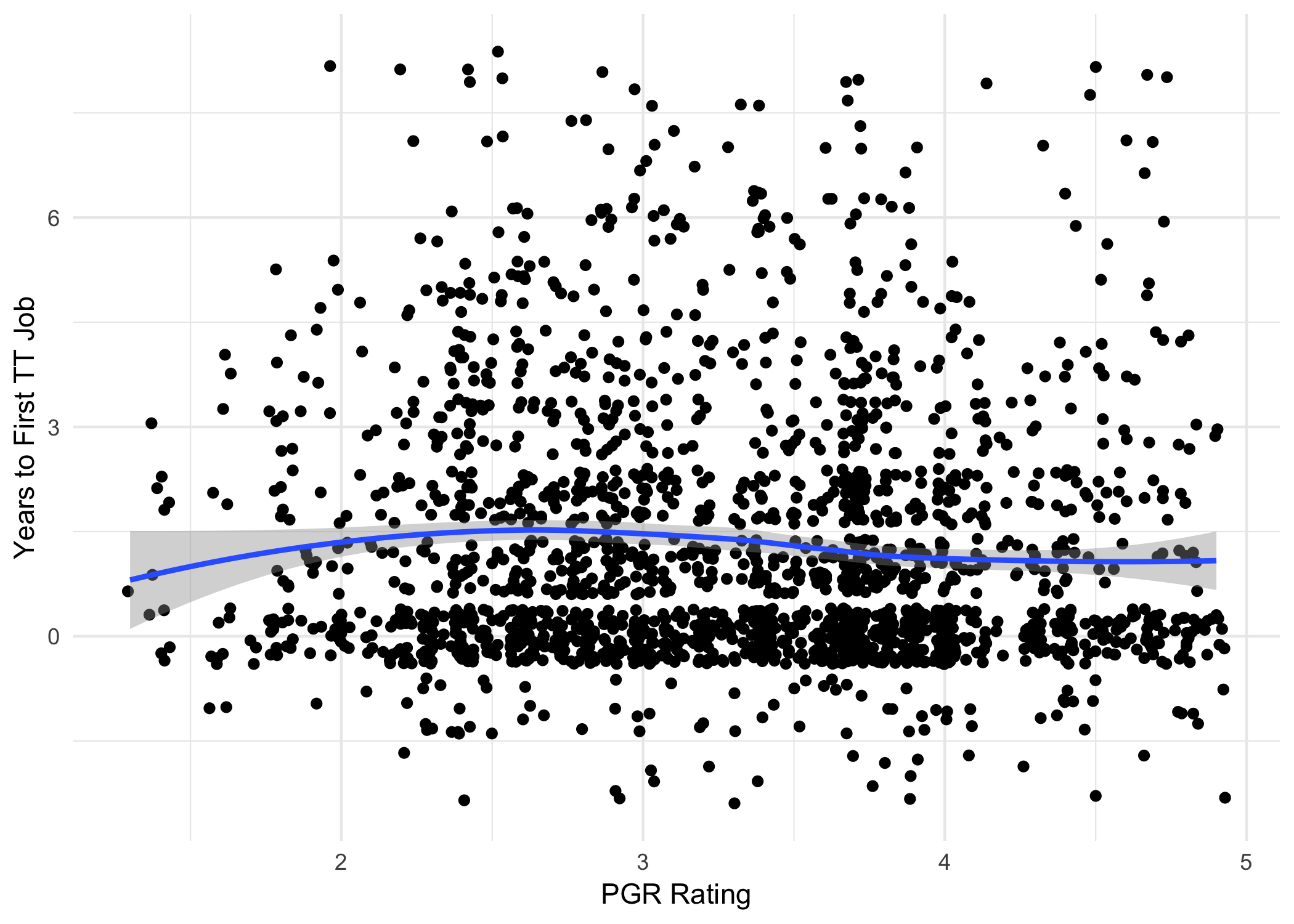 Things look a bit less flat now. Maybe there’s a slight dip in time-to-TT once PGR rating gets above 3 or so. But if so, it looks very small. And the overall correlation is again pretty much zero:

Ok, one more try. Things work differently in different parts of the world. PhD programs and job markets differ in their practices between the US and the UK, between the UK and the rest of Europe, etc. So let’s try looking at just the US (the largest locale we have data for and the one I understand best): 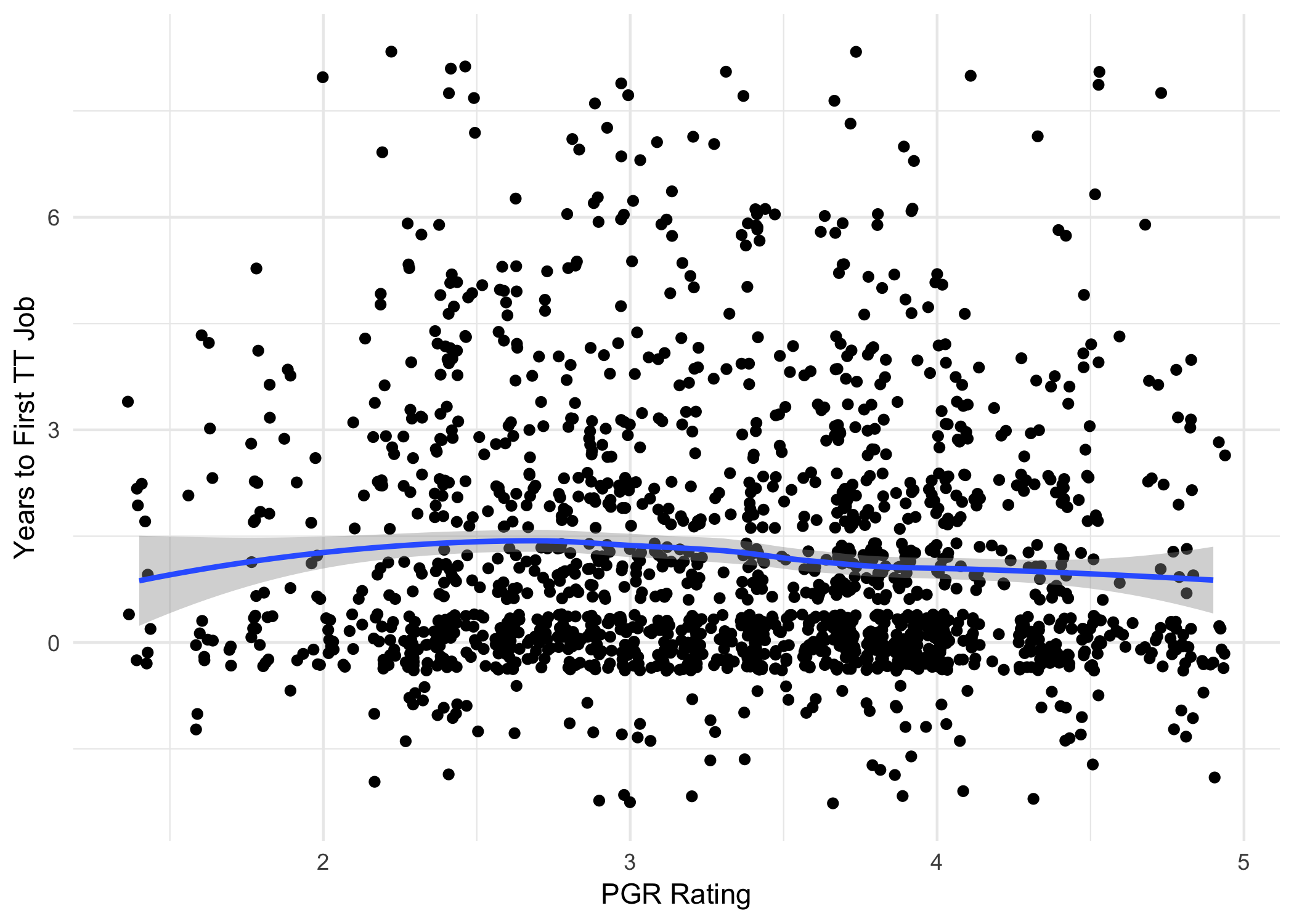 Again, it looks like there’s only a very slight dip as PGR rating exceeds 3, with a correlation very close to zero:

We could go on slicing and dicing, and I don’t by any means see this as the last word. But my expectations have certainly been shaken up here. If there is a connection between prestige and time-to-TT, the available evidence suggests it’s much weaker than I would have guessed, and perhaps depends a lot on other factors.

Hopefully we’ll get a clearer picture of all this as the APDA database grows. Their focus so far has been on graduates from 2012–2016. So the earlier data is probably much less complete (see: Makinson). And not enough time has passed yet for the 2012–2016 data to be as informative about time-to-TT.

So even though this conclusion is striking, I still view it as tentative. #JustOneStudy