Does an author’s gender affect the fate of their submission to an academic journal? It’s a big question, even if we restrict ourselves to philosophy journals.

But we can make a start by using Ergo as one data-point. I’ll examine two questions:

Some important background and caveats before we begin:

Does an author’s gender affect the journal’s decision about whether their submission is accepted? We can slice this question a few different ways:

The short answer to all these questions is: no, at least not in a statistically significant way. But there are some wrinkles. So let’s take each question in turn.

Does gender affect the first-round decision to reject/accept/R&R?

Ergo has two kinds of R&R, Major Revisions and Minor Revisions. Here are the raw numbers: 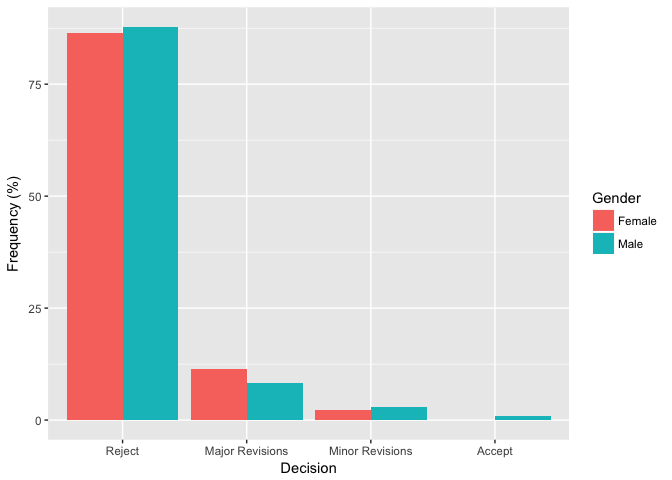 There are differences here, of course: women were asked to make major revisions more frequently than men, for example. And men received verdicts of minor revisions or outright acceptance more often than women.

Are these differences significant? They don’t look it from the bar graph. And a standard chi-square test agrees.1

Things are a little more interesting if we separate out desk rejections from rejections-after-external-review. The raw numbers: 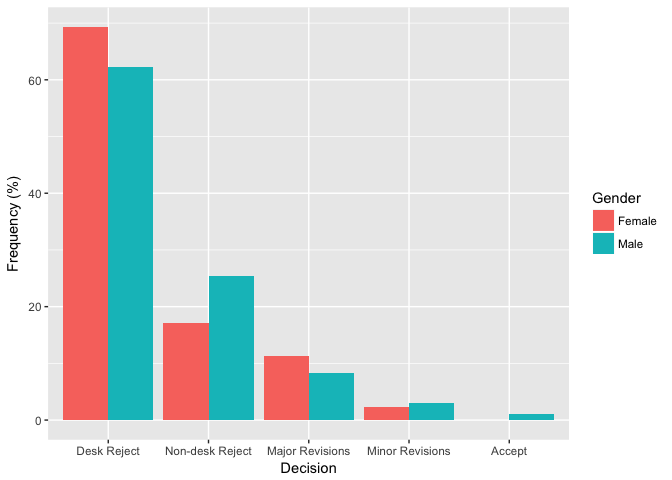 The differences here are more pronounced. For example, women had their submissions desk-rejected more frequently, a difference of about 8.5%.

But once again, the differences are not statistically significant according to the standard chi-square test.2

What if we just consider a submission’s ultimate fate—whether it’s accepted or rejected in the end? Here the results are pretty clear: 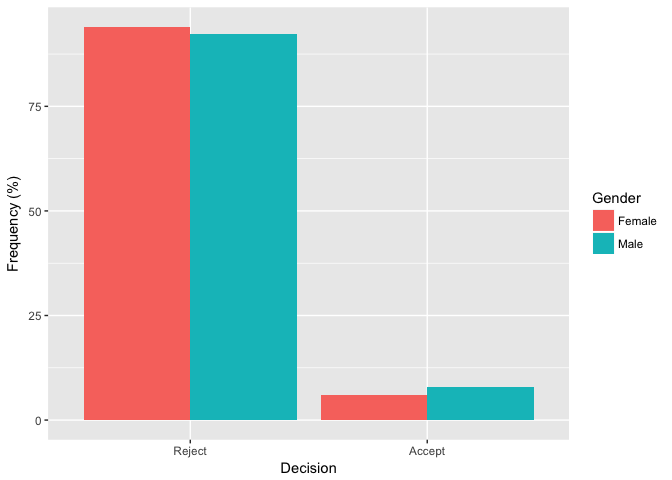 Our analysis so far suggests that men and women probably have about equal chance of converting an R&R into an accept. Looking at the numbers directly corroborates that thought: 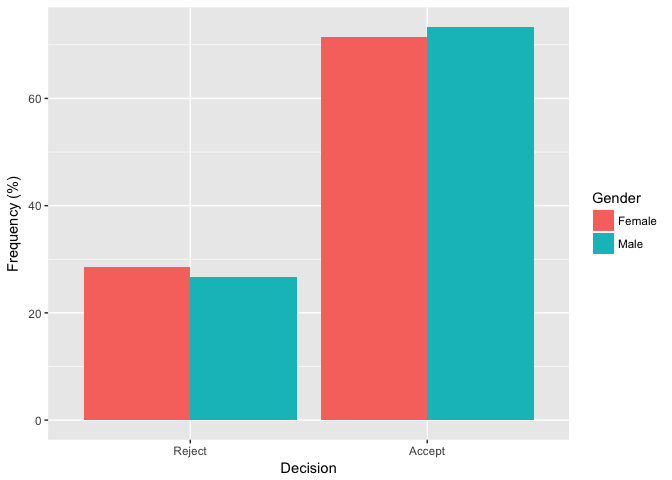 As before, a standard chi-square test agrees.4 Though, of course, the numbers here are small and shouldn’t be given too much weight.

None of the data so far yielded a significant difference between men and women. None even came particularly close (see the footnotes for the numerical details). So it seems the journal’s decisions are independent of gender, or nearly so.

Authors don’t just care what decision is rendered, of course. They also care that decisions are made quickly. Can men and women expect similar wait-times?

The average time-to-decision is 23.3 days. But for men it’s 23.9 days while for women it’s only 19.6. This looks like a significant difference. And although it isn’t quite significant according to a standard $t$ test, it very nearly is.5

What might be going on here? Let’s look at the observed distributions for men and women: 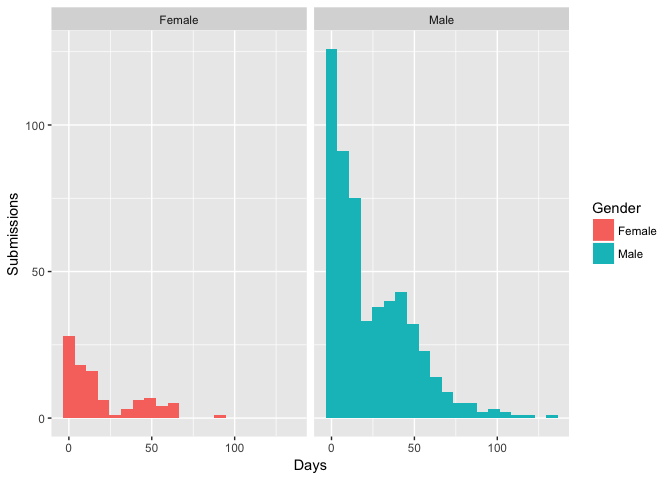 A striking difference is that there are so many more submissions from men than from women. But otherwise these distributions actually look quite similar. Each is a bimodal distribution with one peak for desk-rejections around one week, and another, smaller peak for externally reviewed submissions around six or seven weeks.

We noticed earlier that women had more desk-rejections by about 8.5%. And while that difference wasn’t statistically significant, it may still be what’s causing the almost-significant difference we see with time-to-decision (especially if men also have a few extra outliers, as seems to be the case).

To test this hypothesis, we can separate out desk-rejections and externally reviewed submissions. Graphically: 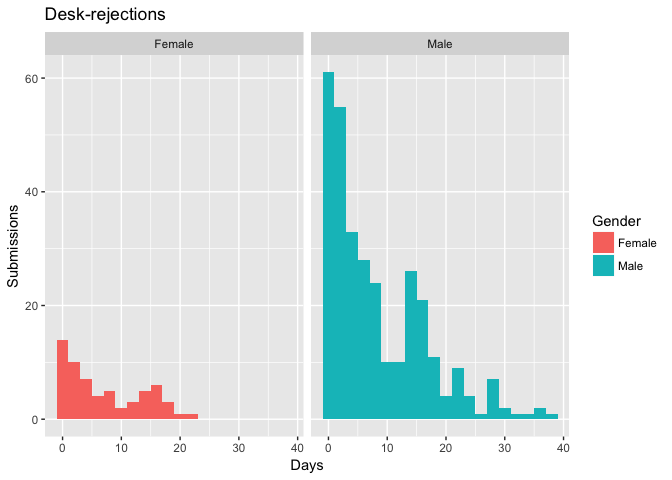 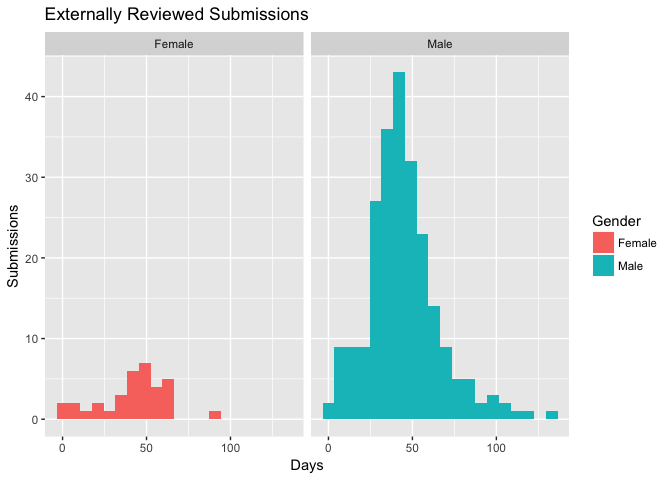 Apparently an author’s gender has little or no effect on the content or speed of Ergo’s decision. I’d like to think this is a result of the journal’s strong commitment to triple-anonymous review. But without data from other journals to make comparisons, we can’t really infer much about potential causes. And, of course, we can’t generalize to other journals with any confidence, either.

This post was written in R Markdown and the source is available on GitHub. I’m new to both R and classical statistics, and this post is a learning exercise for me. So I encourage you to check the code and contact me with corrections.