Last time we saw that the set of probability assignments is convex. Today we’re going to show that convex sets have a special sort of “obtuse” relationship with outsiders. Given a point outside a convex set, there is always a point in the set that forms a right-or-obtuse angle with it.

The insider point $c’$ that we used in this case is the closest point on the diagonal to $c^*$. That’s what licenses the right-triangle reasoning here. Today we’re generalizing this strategy to $n$ dimensions.

You’re familiar with arithmetic in one dimension: adding, subtracting, and multiplying single numbers. What about points in $n$ dimensions?

We introduced two ideas for arithmetic with points last time. We’ll add a few more today, and also talk about what they mean geometrically.

This definition has a natural, geometric meaning we didn’t mention last time. Start by thinking of $\x$ and $\y$ as vectors—as arrows pointing from the origin to the points $\x$ and $\y$. Then $\x + \y$ just amounts to putting the two arrows end-to-point and taking the point at the end: 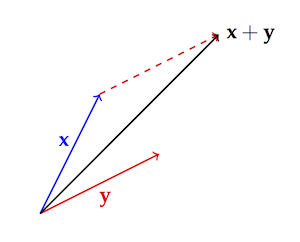 (Notice that we’re continuing our usual practice of bold letters for points/vectors like $\x$ and $\y$, and italics for single numbers like $x_1$ and $y_3$.) 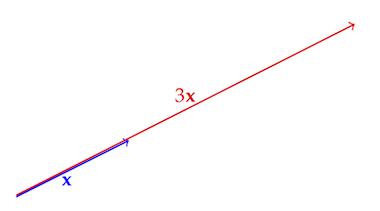 If $a$ is negative, then multiplying by $a$ reverses the direction of the arrow. For example, multiplying the northeasterly arrow $(1,1)$ by $-1$ yields the southwesterly arrow pointing to $(-1,-1)$.

But what about multiplying two vectors? That’s actually different from what you might expect! We don’t just multiply coordinate-wise. We do that and then add up the results: $$ \x \cdot \y = x_1 y_1 + \ldots + x_n y_n. $$ So the product of two vectors is not a vector, but a number. That number is called the dot product, $\x \cdot \y$.

(There’s an algebraic side to the story too, having to do with the axioms that characterize the real numbers—the field axioms. We won’t go into that, but it comes out in this bit of a beautiful lecture by Francis Su, especially around the 11:45 mark.)

Signs and Their Significance

In two dimensions, a right angle has a special algebraic property: the dot-product of two arrows making the angle is always zero. 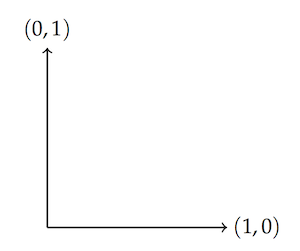 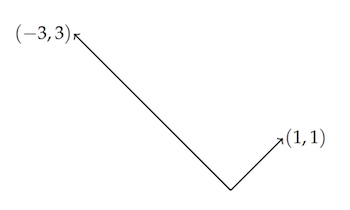 Going a bit further: the dot product is always positive for acute angles, and negative for obtuse angles. Take the vectors $(5,0)$ and $(-1,1)$:

So the sign of the dot-product reflects the angle formed by the vectors $\x$ and $\y$:

That’s going to be key in generalizing to $n$ dimensions, where reasoning with diagrams breaks down. But first, one last bit of groundwork.

Now we can prove the lemma that’s the aim of this post. For the intuitive idea, picture a convex set $S$ in the plane, like a pentagon. Then choose an arbitrary point $\x$ outside that set: 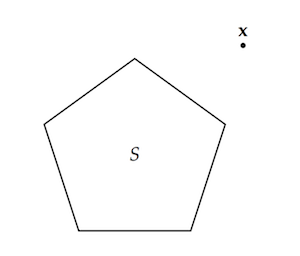 Now trace a straight line from $\x$ to the closest point of the convex region, $\y$: 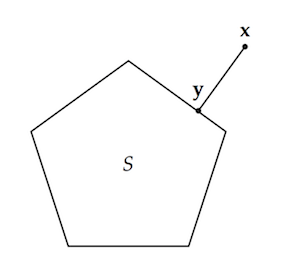 Finally, trace another straight line to any other point $\z$ of $S$: 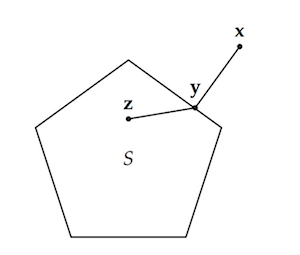 No matter what point we choose for $\z$, the angle formed will either be right or obtuse. It cannot be acute.

Let’s pause to understand what the Lemma is saying before we dive into the proof.

Focus on the centered inequality. It’s about the vectors $\x - \y$ and $\z - \y$. These are the arrows pointing from $\y$ to $\x$, and from $\y$ to $\z$. So in terms of our original two dimensional diagram with the triangle: we’re looking at the angle between $c^*$, $c’$, and any point on the diagonal you like… which includes the ones we’re especially interested in, the vertices. What the lemma tells us is that this angle is always at least a right angle.

Of course, it’s exactly a right angle in this case, not an obtuse one. That’s because our convex region is just the diagonal line. But the Lemma could also be applied to the whole triangular region in the diagram. That’s a convex set too. And if we took a point inside the triangle as our third point, the angle formed would be obtuse. (This is actually important if you want to generalize the dominance theorem beyond what we’ll prove next time. But for us it’s just a mathematical extra.)

Here’s what we’ve got from this post and the last one:

And indeed, that’s what we’ll show in the next post!