In this and the next two posts we’ll establish the central theorem of the accuracy framework. We’ll show that the laws of probability are specially suited to the pursuit of accuracy, measured in Brier distance.

We showed this for cases with two possible outcomes, like a coin toss, way back in the first post of this series. A simple, two-dimensional diagram was all we really needed for that argument. To see how the same idea extends to any number of dimensions, we need to generalize the key ingredients of that reasoning to $n$ dimensions.

This post supplies the first ingredient: the convexity theorem.

Convex shapes are central to the accuracy framework because, in a way, the laws of probability have a convex shape. Hopefully that mystical pronouncement will make sense by the end of this post.

You probably know a convex shape when you see one. Circles, triangles, and octagons are convex; pentagrams and the state of Texas are not.

But what makes a convex shape convex? Roughly: it contains all its connecting lines. If you take any two points in a convex region and draw a line connecting them, the line will lie entirely inside that region.

But on a non-convex figure, you can find points whose connecting line leaves the figure’s boundary: 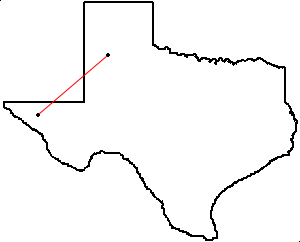 We want to take this idea beyond two dimensions, though. And for that, we need to generalize the idea of connecting lines. We need the concept of a “mixture”. 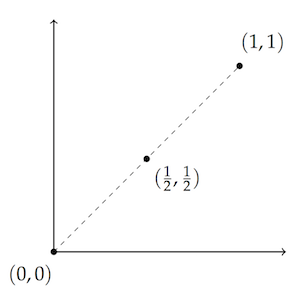 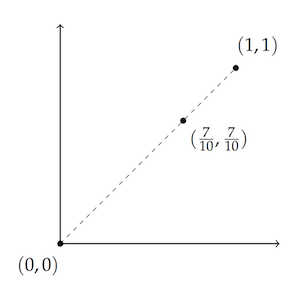 In fact, you can mix any number of points together. Given $m$ points $\q_1, \ldots, \q_m$, we can define their mixture as follows. Let $\lambda_1, \ldots \lambda_m$ be positive real numbers that sum to one. That is:

It turns out that the set of possible probability assignments is convex.

What in the world is a “convex hull”?

Imagine some points in the plane—the corners of a square, for example. Now imagine stretching a rubber band around those points and letting it snap tight. The shape you get is the square with those points as corners. And the set of points enclosed by the rubber band is a convex set. Take any two points inside the square, or on its boundary, and draw the straight line between them. The line will not leave the square.

For example, any of the points in our square example can be obtained by taking a mixture of the vertices. Take the center of the square: it’s halfway between the bottom left and top right corners. To get something to the left of that we can mix in some of the top left corner (and correspondingly less of the top right). And so on.

Now imagine the rubber band exercise using the possible truth-value assignments, instead of the corners of a square. In two dimensions, those are the points $(0,1)$ and $(1,0)$. And when you let the band snap tight, you get the diagonal line connecting them. As we saw way back in our first post, the points on that diagonal line are the possible probability assignments.

We also saw that if you take any point not on that diagonal, the closest point on the diagonal forms a right angle. That’s what lets us do some basic geometric reasoning to see that there’s a point on the line that’s closer to both vertices than the point off the line:

That fact about closest points and right angles is what’s going to enable us to generalize the argument beyond two dimensions. If you take any point not on a convex hull, there’s a point on the convex hull (namely the closest point) which forms a right (or obtuse) angle with the other points on the hull.

Consider the three dimensional case. The possible truth-value assignments are $(1,0,0)$, $(0,1,0)$, and $(0,0,1)$: And when you let a rubber band snap tight around them, it encloses the triangular surface connecting them: That’s the set of probability assignments for three outcomes.

Essentially the same reasoning works in any number of dimensions. But to make it work, we need to do three things.

We’re going to prove that the set of possible probability assignments is the same as the convex hull of the possible truth-value assignments. First let’s get some notation in place.

As usual $n$ is the number of possible outcomes under consideration. So each possible truth-value assignment is a point of $n$ coordinates, with a single $1$ and $0$ everywhere else. For example, if $n = 4$ then $(0, 0, 1, 0)$ represents the case where the third possibility obtains.

In the notation just established, what we’re trying to show is that $V^+ = P$.

Theorem. $V^+ = P$. That is, the convex hull of the possible truth-value assignments just is the set of possible probability assignments.

So we turn to showing that $P \subseteq V^+$. In other words, we want to show that every probability assignment can be obtained as a mixture of the $\v_i$’s.

We’ve established the first of the three items listed earlier. Next time we’ll establish the second: given a point outside a convex set, there’s always a point inside that forms a right or obtuse angle with any other point of the set. Then we’ll be just a few lines of algebra from the main result: the Brier dominance theorem!